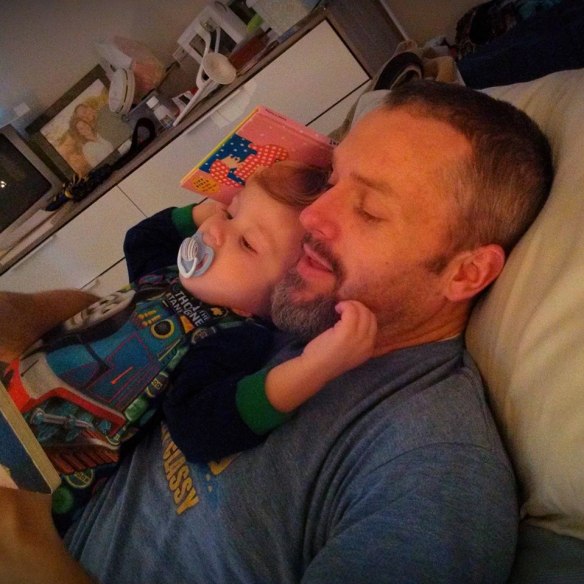 You’re a good man! I have heard this reinforcement from my wife on countless occasions. I know it’s not just lip-service either; I know she truly means it, but even after 10 years together I still have a hard time believing it. I don’t think I’m a bad person by any means, and I’m certainly not worried that other think I’m a bad person, because that’s just not true.
Sure, like anyone else I can be an asshole from time to time. But what I am, is afraid. Afraid what I could become; afraid of what my future may hold, afraid of my past catching up with me; afraid that my son will one day see me as I see my parents. This is the real reason I believe the Wife reminds me regularly that I’m a good man, because she knows I need to hear it; because she knows the scars are so deep; because she knows I don’t believe it, especially when it comes to raising our son.
Ferris idolizes me, or at least that’s how the Wife sees it. I hate to admit it, and I always deny it when she tells me so, but it’s true. Ferris’ affection towards me is everything (and more) that most people say about little boys and their mothers, trust me, I would know as a former mama’s boy.
Each and every day I am told countless times, “I love you Daddy, you my best friend.” He does everything he can to match me in how he dresses, or mimic my behavior, and while I should be embracing all this, soaking it up for all that it’s worth, bragging about my mini-me, I spend most of my time holding my loving son at arms length out of fear of what he might feel if he knew what goes through my head on a regular basis.
I’m going to admit something that I’ve never told anyone…I’m not sure I ever wanted to have kids. I mean, I said I did. Of course, I’ve said a lot of things because I thought that’s what I was supposed to say. The idea of having kids literally gave me anxiety and fear that I can never fully describe. Not because kids scare me or anything…even though my son does scare me now and then. But out of fear of what I might DO to them one day.
When the Wife and I found out we were going to have a kid, I was excited, but I was also terrified. All the skeletons I had been keeping at bay were going to come pouring our of the closet; all the scars I had covered with every symbolic band-aid I could find were going to be in full view of this new person. They were going to see me as everything my mother always told me I was – weak, stupid, a failure, worthless.
This little person; this new life, was going to see me like I see her. Resent me like I resent her for wasting the preciousness of childhood. Or maybe I was going to inevitably screw up my marriage and become the absent father to him, like mine was to me.
The fear over the nine months that follow was excruciating, and it only got worse as 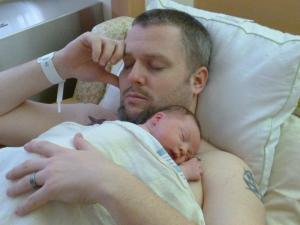 we neared his due date. And then it happened…Ferris was born, and when they put him in my arms, the fear disappeared (at least for that moment). I knew I had an opportunity to fix things, and opportunity to start over, to make sure this little person never experienced the trials and heartbreak, the pain both physically and emotionally, that I did.  A chance at a clean slate.
Eventually, the initial feeling of awesomeness from having a child wears off as everyday life resumes, but somehow the voices and feelings of doubt are still there. The feelings of you’re screwing everything up, you’re never going to be able to do this, she was always right about you, you’re not a good husband, you’re not a good dad, you’re not a good man.
That’s the thing…the scars that come from psychological and emotional abuse; those last forever. They’re the hardest to shut out in your mind. I struggle with these thoughts almost everyday. I’m thankful I have a wife that knows that, and is there to remind me that they are just voices. Voice from a ghost that is angry about their own failures, and in no way define me.
Recently I lost my job and the Wife and I have been spending a lot of time together at home, since she runs her business from home. During lunch one day we were both joking about Ferris and talking about his changing personality. The subject of his parental preference (clearly me over her) came up. I know it bugs the Wife a good deal, what mother wouldn’t be bummed? But she said something to me that really dug in deep. Something, that for the first time dug deeper than the negative voices.
“Mike, I love the way he looks at you. He adores you and the ground you walk on. Do you realize what you have with him is what you never had growing up? Do you even comprehend that you’re the thing to him that you never had; the thing you craved…a dad?”
Her words hit me. I was doing a good job. I am good husband (most of the time). I am a good dad. And most of all, I am a good man, all because of the way he sees me. I owe it to him to believe in myself more. I owe to my wife to rediscover some self confidence. I owe it myself to invest in some self worth. And, as of recently announced, I owe it to #2, our unborn daughter, to fully believe that I am a good man, because I’m going to be the first one she meets.
It’s hard to imagine that just 5 years ago I wasn’t sure I even wanted to have children, because now I couldn’t imagine life without my son. Despite how this blog may sound, I love my son to unimaginable depths, and already love #2 the same. Now it’s time I love myself the same way.