I grew up in probably the greatest decade this planet will ever see – the 1980’s. As I watch my son grow and see him experience his childhood unfolding before him, I can’t help but think, “Man, are you missing out.”
I mean, everything was cooler in the 80’s. The music was far better than what’s out there today, the cartoons of the 80’s crush anything on TV right now, the TV shows were so much more original (Alf and Mr. Belvedere were two of my all-time favorites), and the movies…give me any movie from the 80’s and I’d throw it up against anything that’s in theaters now, and I guarantee, the 80’s movie would still hold up. Heck, half the movies out these days are either inspired by, ripoffs of, or straight up remakes of 80’s classics.

As you can tell, I’m a total movie nut. Movies were my best friends growing up. As the only child of a single mom, I was home alone a lot. Movies helped fill that void of not having someone to talk to, and as a kid with a very active imagination, movies helped me escape reality and transport myself somewhere else.
Another crucial component of my movie-watching bliss, was the food I consumed during viewings. And nothing paired with movie-watching better than pizza; Ellio’s frozen pizza to be exact. It didn’t matter what I was watching, classic 80’s comedies from John Hughes (The Breakfast Club and Ferris Bueller’s Day Off are my personal favorites), action flicks like Terminator or Commando, or some of my favorite stand-up comedy from greats like George Carlin, Eddie Murphy or Robin Williams; Ellio’s pizza was being consumed during all of them. 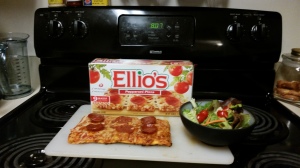 Don’t get me wrong, I love takeout pizza as much as the next guy, but when I want to hearken back to my childhood, I just pop in a DVD, slide some Ellio’s Pizza into the oven, and in less than 15 minutes, BANG…instant #Pizzastalgia. I don’t know what it is; maybe it’s the crunch of the bread after crisping up in the oven, or the taste of 100% real cheese (and no artificial flavors), but once I take my first bite I instantly feel like a kid again. And as a dad trying to set a positive example for my kids, Ellio’s pairs great with a nice side salad.
I have even started introducing my son to the awesomeness that is the 80’s. The Wife and

I have dubbed Friday nights Family Picnic Night in the Preach House. It’s like our own Dinner Club, get it (rim shot)? And while my son is not quite old enough for a John Hughes comedy just yet, we pick out an awesome cartoon or animated movie from the 80’s to watch. And as for the menu during our Friday movie nights; you guessed it, Ellio’s pizza (what can I say, the boy is his father’s son).
Find out where you can score some Ellio’s with this handy store locator and help your kid experience 80’s awesomeness with some frozen pizza!
Follow Ellio’s online: http://www.ellios.com/
Facebook: https://www.facebook.com/elliospizza/
Twitter: https://twitter.com/elliospizza
Tumblr: http://elliospizza.tumblr.com/
Instagram: https://www.instagram.com/officialelliospizza/
Disclosure: This is a sponsored post on behalf of Life of Dad and Dr. Oetker USA LLC. I have received compensation for this post; however, all opinions stated are my own.

6 thoughts on “Pizza and Movies: A Story of My 80's Childhood”