One of my writer-friends posed a question to me the other day asking if I was going to write a post about Christmas this year. I laughed it off saying it wasn’t really my style, plus I couldn’t really think of anything snarky to say about my son pertaining to Christmas. That of course doesn’t count the numerous jabs I’ve been taking at him in 140 characters or 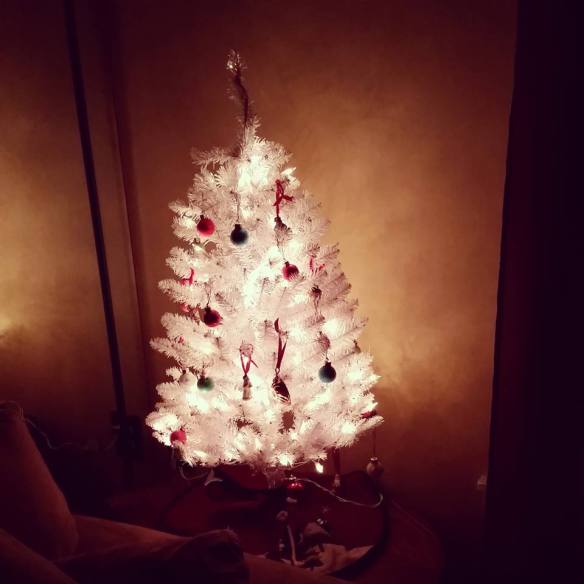 less on Twitter and the numerous statuses on Facebook detailing his buffoonery. But other than that, I got nothing.
Then a funny thing happened last weekend. As I watched the Wife and the Boy hang decorations on our mini table-top tree, I started getting a little mushy. Seeing him so excited to hang little ornament after little ornament, it got me thinking about the holidays and all the traditions and symbols that surround the Christmas season.
I was talking with a coworker just a few days later, when the topic of Santa Claus came up. They asked me if I had taken my son to get his picture taken with the jolly fat man in the red suit, to which I replied, “Actually no. He’s almost 3 and we haven’t even tried once yet.” To be honest the Boy has just started recognizing who Santa is, but he certainly doesn’t know, or care for that matter what Santa is all about.
My coworker went on to say, “Oh, you don’t know how lucky you are. At least you won’t have to lie to him that long, plus it will make it easier when you tell him Santa’s not real.” This got me thinking; why should I feel lucky? I’m actually kind of bummed we haven’t been able to do the whole mall-picture-5th-ring-of-hell experience; I mean it’s kind of a rite of passage for parents, and a tradition. Hell, I’m more upset about the missed opportunity to appear on awkwardfamilyphotos.com someday.


I remember the exact moment from my childhood that I first heard someone say Santa wasn’t real. I was 8 years old, and the daughters of the lady who watched me after school were making fun of their little brother (probably 4 or 5) for still believing in jolly old Saint Nick. They proceeded to ridicule and tease him telling them it was mom and dad who did all the Santa-related things on Christmas Eve. I was instantly crushed, and paralyzed by disbelief. The entire time they were picking on their little brother, they had no idea the kid standing next to them was having his heart broken from the news. As their little brother cried and refused to believe what they were saying, out of nowhere all the attention turned to me. The girls said, “If you don’t believe us, just ask Mike.” Their little brother, with tears in his eyes, looked to me for some sort of back up. Hoping and praying I would scream out, “DON’T LISTEN TO THEM!! SANTA IS REAL!!”, but out of nowhere the words just came out, “Oh yeah, I totally knew that already.”
It’s that memory that left me pondering; why do I ever need to tell my son Santa isn’t real? Who am I to make that decision for him? And further more; what if I’m wrong?
Look, I know I’m a snarky dude, and I like to shoot it straight, but if there is one time I’m going to admit this, it’s now; the Boy is my ultimate weakness. I’m never going tell him Santa isn’t real. Why would I do that? Why would I want to take that from him? Much like any part of life that has to do with belief or faith, shouldn’t this be a journey for him and him alone? Isn’t it ultimately up to him if he continues to believe in the man from the North Pole?
The really cool thing about having kids (and I’m serious; this is the only time of year you’re going to catch me saying shit like this) is that you get to rediscover everything in life all over again. I know what’s it’s like to be an adult, and it ain’t that fun. But everything he’s experiencing right now is off the wall awesome. Every time he finds a pine cone on the ground when we’re out for a walk and acts like he just found the fucking Holy Grail, it’s awesome, and I can’t help but get caught up in his excitement too. Whenever he sees a fire truck roll by and he gets so happy I literally think he’s going to lose his water in his pants, it’s amazing. So when I hear him get super excited when he sees a picture of Santa in a bedtime story we’re reading, and I see his beautiful little face light up I think, “You hold on to that buddy; don’t ever stop believing because the world needs more of that joy.”
It’s funny that it’s taken almost 40 years to learn that Santa is more than just the story of some fat dude in a suit who somehow squeezes his rotund self down each and every chimney, for every boy and girl, to bring them presents on Christmas Eve (not to mention somehow fitting in all the apartments and houses without fireplaces). Santa is a tradition; a symbol of all that is awesome about the holiday season. So what if someone tells you Santa isn’t real, I say keep on keeping on with believing. Would this world really be such a worse-off place if millions of people held on to the belief that probably the nicest person they have ever heard of exists, as opposed to being resigned to knowing their exhausted and cranky parents were the ones behind all the Christmas magic? I know one person is who definitely trying to keep that magic alive.
Cara Day, the founder of Daychild (daychild.org), is that person. Daychild is an educational online resource to assist parents in offering the very best options with trying to connect with their children in positive ways, especially for the busy parent (i.e. pretty much all of us these days). Mrs. Day is an educational therapist, life coach, and mother of 4, not to mention a fellow San Diego, CA native.
Cara reached out to me last week and presented me with her latest video on how to keep kids believing in Santa Claus for as long as possible, and I think it’s a pretty cool idea.

For even more videos from daychild.org check out their YouTube channel
So I say – why not keep the idea of Santa alive for as long as possible? After watching Mrs. Day’s video, along with seeing my son’s excitement over the past 2 weeks, I really feel like I’m rediscovering the excitement for Santa all over again, and I can’t wait to cultivate that excitement in my son.
To all my awesome Preachys out there, thank you so much for reading all my stuff this year. You have made this past year an unbelievably exciting time. And don’t worry; I’ll be back in 2015 with my same old snarky stuff. Besides, the Boy is turning 3 soon after Christmas, to which the Wife and I will be entering a new ring of hell. But for now, have a Happy Holiday and a very Merry Christmas from the Preach family.